See latest news of MEIA Research below, in the archive on the right
and follow us on Facebook

In an essay for Qantara.de and in talks with Frankfurter Allgemeine Zeitung, Edmund Ratka reflects the historical past and contemporary situation and role of Jordan on the occasion of the foundation of the Hashemite Kingdom in 1921, 100 years ago.

Edmund Ratka informed in a statement and an interview to Deutschlandfunk Kultur about recent turmoil in Jordan, after rumors about a planned coup against the monarch from royal and military ranks appeared in public.

Interview on the Israeli elections

Katharina Konarek gave an interview to WDR 5 radio (in German) on the elections to the Israeli parliament, the Knesset - taking place fourth within two years due to complicated government formation.

Dr. Edmund Ratka published an analysis on German-Jordanian relations - "Jordan as a partner of Germany's Middle East policy" (in German).

Thomas Schiller gave an interview to Redaktionsnetzwerk Deutschland (in German) about the so called G5 summit of the Sahel countries - Niger, Mali, Mauretania, Chad and Burkina Faso - taking place after France's decision to withdraw troops for its fight against terrorism that shakes the region.

How do politics and literature relate to each other? Where does Egypt stand, ten years after the toppling of long-term dictator Hosni Mubarak? How stable are authoritarian regimes in North Africa and the Middle East? The Egyptian novelist Alaa Al-Aswany answered these questions in an interview conducted by Michael Bauer.

ten Years Since the Arab Spring

Ten years ago a massive wave of protests started in the Tunisian countryside and shook authoritarian regimes across the MENA-region. In his position as policy advisor at Konrad-Adenauer-Foundation, Michael Bauer gave an interview on the causes of the Arab Spring and how the region has developed since.

10 Years After the Arab Spring: retrospective and Look ahead

Discussion with Book Presentation and Talks with Experts (Online)

organized by the Center for Applied Policy Research at Munich University, MEIA Research and Tunisian partners

by registering via e-Mail to Ludwig.schulz@lrz.uni-muenchen.de

On 17 December 2010, the self-immolation of the street vendor Mohamed Bouazizi in the Tunisian town of Sidi Bouzid triggered a transnational wave of protest and a historic upheaval. Decades-old autocratic regimes fell, civil wars and counterrevolutions followed in some states in the region, reforms and new social dynamics in others.

For ten years “the Arab world” has been changing its face. What are the major challenges, but also what opportunities are facing the people of the region and with them their European neighbors? What role does Germany play, what can we contribute to change?

With Franz Maget, former Bavarian top politician and late-appointed staff member at the German embassies in Cairo and Tunis as well as consultant, author and editor of the book “Ten Years of the Arab Spring – What’s now?“, we want to get to the bottom of the causes and consequences of the uprisings in the region. Particular emphasis is placed on the situation in Tunisia, the only country to have made a transition to democracy.

Voices directly from Tunisia – participants in the program “Political Consulting and Strategy Development”, which the C.A.P. has been implementing since 2016 with the Union des Tunésiens Indépendents pour la Liberté and other partners in the framework of a multi-year cooperation between the Free State of Bavaria and the Republic of Tunisia – provide insights into current social, economic and political challenges the country faces.

Turkey and the EU in global political economy

The Berlin Bosphorus Initiative, organized by the Federation of German Industries (BDI) and the Turkish Industry and Business Association (TÜSIAD) published the paper titled "Turkey and the EU in global political economy" by Ludwig Schulz in its BBI InBrief series.

Multilateralism in the Middle East

In their article "On the Search for Order in the Middle East and North Africa" for Konrad Adenauer Foundation's publication series Auslandsinformationen, Michael Bauer and Dr. Edmund Ratka analyse the prospects and challenges for multilateral approaches in the Middle East. The publication can be accessed here.

At a teachers' seminar on "The changing Middle East", organized by Anja Opitz at the Academy of Civic Education Tutzing, Michael Bauer, Edmund Ratka and Ludwig Schulz  lectured on the topics of "The systemic transformation of the Middle East", "The democratic transition in Tunisia" and "The Gulf countries between social modernization, authoritarian rule and ambitious foreign policies", respectively.

Libya-Developments in the shadow of corona

For Konrad-Adenauer-Foundation, Michael Bauer co-authored a report on the political developments in Libya's internationalized conflict in the shadow of the Corona crisis. Foreign interference in the country remains high.

the situation in the Sahel

From his base in Bamako, Mali, Thomas Schiller wrote an analysis of the regional security and stability situation in the Sahel region for the Auslandsinformationen of the Konrad Adenauer Foundation.

Michael Bauer co-authored with his colleague Simon Engelkes from Konrad-Adenauer-Stiftung an analysis on the newly-launched EU naval mission Irini. The mission is to monitor the international arms embargo against Libya that was imposed already in 2011 but has been repeatedly broken since. The publication is available in German only.

The first Young Security Conference on "New European Union security Roadmaps" at the sidelines of the main Munich Security Conference has been taking place this weekend, organized by EuropaNova and the University of the German Armed Forces Munich and by the support, beyond others, of MEIA Research and, in particular as speaker and panelist, Anja Opitz. The event gathered more than 30 young security scholars and professionals from Europe and beyond, exchaning views and working on new thinking about current and future security issues. 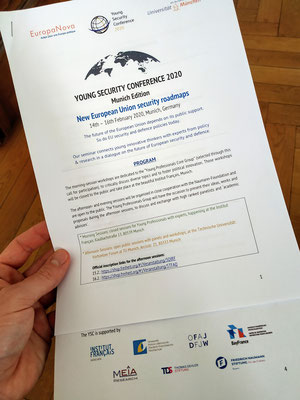 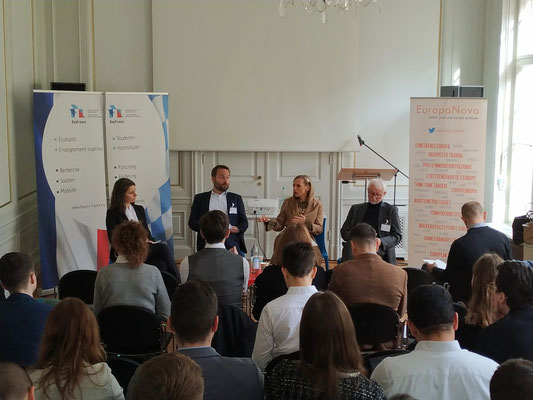 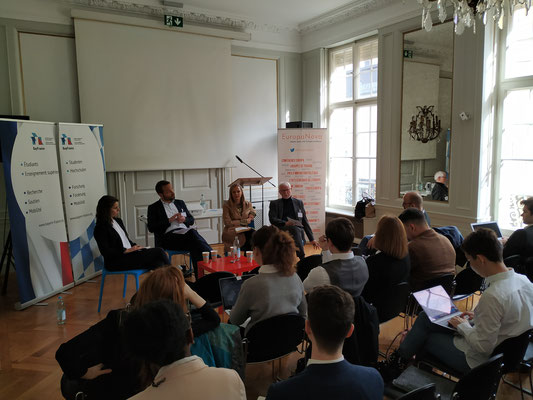 Michael Bauer and Silvia Simbeck facilitated another self-monitoring workshop with the team of UN ESCWA's National Agenda for the Future of Syria (NAFS) program. The workshop covered the status of the program, ongoing activities, challenges and next steps. A specific focus was also on the development of the NAFS program beyond 2020. MEIA Research implements the monitoring project for UN ESCWA and GIZ during the project period 2018-2020.

Michael Bauer gave various interviews for German media analyzing expectations and results of the conference on Libya that was hosted by the German government on January 19 in Berlin. The event brought together international stakeholders of the conflict in Libya, among them countries that support fighting groups in Libya and thereby fuel the conflict.

Thomas Schiller analyzed the attempt and results of French President Emmanuel Macron's summit with the heads of state and government of the G5 Sahel Alliance (Burkina Faso, Mali, Mauretania, Niger and Chad) in Pau.

Dr. Edmund Ratka coordinated a review of perceptions and reactions on the death of the Iranian General Soleimani in Iraq.

From 5th to 7th December 2019, MED - MEDITERRANEAN DIALOGUES took place in Rome. MED is an annual high-level initiative and conference promoted by the Italian Ministry of Foreign Affairs and International Cooperation and ISPI (Italian Institute for International Political Studies) with the aim to rethink traditional approaches to the broader Mediterranean region complementing analyses of current challenges with new ideas and suggestions and to draft a new “positive agenda”. MEIA Research Vice-chairwoman Christine Strassmaier participated in a close-door expert panel on Illicit Trafficking in the Mediterranean Region, discussing the nature and dynamic of the nexus between organised crime and terrorism in the Middle East and North Africa.

40 Years after the Iranian hostage crisis

Kathryn Koob, a U.S. State Department staffer, was sent to Tehran in July 1979 as the director of the Iran America Center.With 51 other U.S. diplomats and citizens she held hostage for 444 days from November 4, 1979, to January 20, 1981, after a group of Iranian college students who supported the Iranian Revolution took over the U.S. Embassy in Tehran. Kathryn Koob was one of two women among those held captive. Following her captivity, Ms. Koob resumed her foreign service career which – among other postings – also brought her to Munich.

On 26 September 2019, in a conversation with Dr. René Rieger, Ms. Koob was recalling the events in Iran of 1979-1981. The open public discussion took place at the Amerikahaus Munich and was a joint event by the U.S. General Consulate Munich and MEIA Research.

Dr. Edmund Ratka gave an interview for web.de on recent attacks on Saudi oil facilities and its potentials for escalation of warfare in the Gulf region.

REgional Security in the MIddLE East And North africa

MEIA Research continued its cooperation with the Ostbayerische Technische Hochschule Regensburg in 2019. As in the previous year, Michael Bauer and René Rieger facilitated a seminar for OTH's two-week Summer School within the Master Program Security, Intelligence and Strategic Studies that is jointly run by the University of Glasgow, Charles University in Prague and Dublin City University. This years seminar had the title "Regional Security Complex Middle East: Actors, Alliances, Conflict Dynamics" and specifically focussed on Libya and Syria as case studies.

"The election of Donald Trump as the 45th President of the United States surprised the world and aroused great anxiety. His ‘America First’ rhetoric had already fuelled concerns that his presidency would be radical during the presidential election campaign in 2016. Above all, it seemed to cast doubt on the US’ claim to global leadership, which was regarded as the foundation of the global order that the US had helped to form since the Second World War. From both an internal and external perspective, this book examines the social, institutional and international reasons for the USA’s foreign and security policy under Trump."

Interview on Mayor's Election in Istanbul

Ludwig Schulz gave an interview to Sueddeutsche.de on the re-run elections for the mayor's office in Istanbul, Turkey.

Michael Bauer contributed to a new policy brief by the Bertelsmann Foundation Strategy Group how the EU can overcome its strategic deficits with regard to Syria, demonstrate resolve and response to the foreign policies of Russia, Turkey, Iran, Saudi Arabia, Israel and the USA.

Ludwig Schulz contributed to the monography "German-Turkish relations revisited. The European dimenstion, domestic and foreign politics and transnational dynamics", edited by Ebru Turhan and published by Nomos, with an analysis titled "Shaping geopolitical destiny and coping with political complexity: Germany and Turkey as Central Powers in International Politics".

Ludwig Schulz gave an interview for the RadioWelt of Bayern 2 broadcasting on the Russian-Turkish Summit taking place in Moscow for the initiation of the Turkish Year for Culture and Tourism in Russia.

The government of Bavaria decided to extend the programm "Policy Advice and Strategy Development" on the training of political advisors in Tunisia, designed and implemented by the Center for Applied Policy Research at Munich University with its Tunisian partners, the Faculty of Juridical, Political and Social Sciences of the University of Carthago, the Union of Independent Tunisians for Liberty (UTIL) and the Arab Institute for Human Rights, and led by Ludwig Schulz, for another two years.

Pakistan in the Midst of a stormy Region